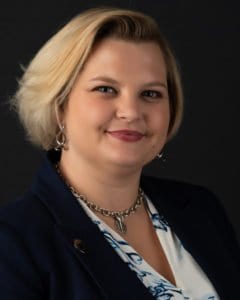 Brittney Barsotti has been named general counsel for CNPA, according to an announcement by Charles Ford Champion II, President and CEO of the 450-member news association. Her appointment to the association’s top legal post is effective immediately.

Barsotti had been serving as staff attorney and legislative advocate for CNPA since joining the association in 2019. She takes over the general counsel position previously held by Jim Ewert, who retired at the end of 2020 after 25 years with CNPA. She earned her Juris Doctor degree with Honors in 2017 from University of the Pacific, McGeorge School of Law in Sacramento.

“Brittney has been a key member of our legal team and, as the head on our legal Helpline for member newspapers, she has become expert in the laws that impact the news industry,” said Champion. “She is also very familiar with the legislative challenges we face with respect to circulation, freedom of information, and public notice advertising, all of which have legal ramifications for our businesses.”

Prior to joining CNPA, Barsotti was active in public service. She worked with the California Department of Corrections and Rehabilitation, the Boards of Parole Hearings and Equalization, and the Office of Legislative Counsel in Sacramento.

A native of California, Barsotti has also been engaged in community service. In 2019 she was support staff leader for Volunteers of America in Sacramento. The organization provides emergency shelter and nutrition for residents with HIV. From 2013-14 she was a classroom coach and team builder with AmeriCorps as a part of California’s First 5.