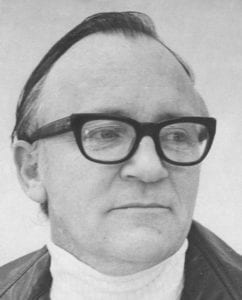 Bill Patterson, one of “The Bee Four” who did time rather than reveal their sources, died Sept. 23, 2018, The Fresno Bee reported. He was 91.

Patterson and fellow reporter Joe Rosato, along with city editor James H. Bort Jr. and Executive Editor George Gruner, served 15 days at the Fresno County Jail’s industrial farm in 1976 after they refused a Superior Court judge’s order to give up the identity of a confidential source, The Bee reported.

“California’s shield law, which helps protect journalists from having to name confidential sources, became stronger after The Bee Four were released,” the article said.

Gruner called Patterson a “crackerjack reporter” who knew his beat — at that time, covering courts and the Fresno County Board of Supervisors — extremely well.

“He knew what he was talking about,” Gruner said, “and there was never any question about the facts in his stories.”

City Editor Bort died in 2010. Rosato and Gruner talked about their jailing on its 40th anniversary in 2016.