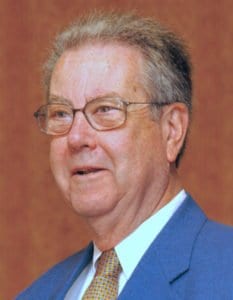 Memorial services will be held June 24 at Westminster Village in Scottsdale, Ariz., for Jack Bates, a lifelong newspaper executive and CNPA’s executive director from 1991 to 2011. Bates died May 24, 2018, in Scottsdale. He was 83.

Bates earned a bachelor of arts degree in economics and business administration from Duke University, Durham, N.C. He also attended the School of Printing Management, Rochester Institute of Technology in New York.

Bates began his newspaper career as the assistant to the publisher of the family owned Meadville Tribune, a 17,000-circulation daily newspaper. The newspaper was sold to Thomson Newspapers in 1972 and Bates became its publisher.

He later was publisher and/or president of the Marion (Ohio) Star, the Morgantown (W.V.) Dominion Post, the Hagerstown (Md.) Herald Mail and the Champaign (Ill.) News Gazette. Bates moved to Sacramento where he was president and general manager of the Sacramento Union from 1985 to 1989.

Bates worked with the newspaper broker Mel Hodell for a six-month stint before being selected from a pool of more than 30 applicants to become CNPA’s executive director in January 1991.

“I am delighted we were able to recruit a seasoned, top-drawer newspaper industry executive like Jack Bates,” said Mort Levine, who was CNPA vice president at the time. “Bates has a kind of empathy with publishers — papers large and small, weekly and daily — stemming from his own years on the firing line.

“He talks our language. Under his management, CNPA will be equal to the tough challenges ahead.”

During his CNPA tenure, Bates initiated several entrepreneurial ventures to ease the association’s dependence on dues. A statewide classified advertising program now provides revenue for participating member newspapers and the association. A national advertising placement service, begun in 1992, grew from nothing to become the premier placement service in the country with billings of $350 million before its sale in 1999.

“Jack was an intuitive leader who always seemed to know where to take the organization, when to do it, and the best way to get there,” said Bill Johnson, CNPA’s immediate past president. “His steady hand and compassionate management style led to an immensely loyal and capable CNPA staff, devoted to its important mission of advocating on behalf of California newspapers.”

Bates retired from CNPA in March 2011. Upon his retirement, the California Press Foundation established the Jack Bates Award for distinguished service.

CNPA-member companies may republish this obituary in their news pages and online. 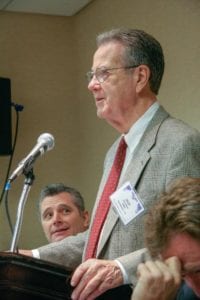 Jack Bates reports to the CNPA Board in 2005. Then-President Will Fleet is at left; then-General Counsel Tom Newton at right.

When he arrived at CNPA, Jack Bates composed this introductory column for the February 1991 edition of California Publisher, CNPA’s official newspaper:

My thoughts for the future

Traditionally, this column would contain a chronicle of the events of the past year.

While I have reviewed this recent history and am aware of most of the major efforts, I am not able to add much of substance since this was not on my watch.

So I will use this space to detail some of my thoughts about our organization and my hopes for the future.

After more than two weeks in the harness I am still sifting through files, asking questions, talking to members and staff and trying to organize and prioritize the variety of items and tasks which are currently on the Association’s plate.

My initial impression is that the California Newspaper Publishers Association is a dynamic, hard-working, goal-oriented mix of dedicated members and professional staff.

Collectively they undertake an impressive volume of assignments which are crafted to help make it possible for our member newspapers and Allied firms to survive and prosper in our increasingly difficult environment.

My days have been full of exciting adventures because there is such a variety of work being handled within the scope of the Association’s charge.

Assignments and responsibilities are well defined and a spirit of teamwork and cooperation provides an atmosphere in which a few people produce a large volume of quality work.

Because our state is so large and diverse, our Association serves a mixed bag of interests.

North and South, large and small, daily and weekly, paid and free, suppliers and associates, our pool of 500 bosses all see the functions of the Association from different perspectives.

Fortunately there has evolved a well-organized structure of elected management and volunteer committees from which flow the direction and priorities for all our efforts. Here the blending of volunteers and staff is the fuel which drives the engine.

The measure of the success of CNPA will be the degree of participation of members who are willing to devote the time and effort to help address and solve the many problems which face our industry today.

CNPA is doing a fine job, and smart people don’t try to fix something which is not broken.

While I am full of enthusiasm and eager to contribute to our continued success, I want to acclimate myself carefully into the management structure.

My management style is to be very accessible, open and candid. My main thrust will be to fine tune our collective efforts and add value for our members.

I want our organization to be even more responsive and helpful by being very creative in the ways we allocate our limited resources to cover all of the bases.

I already know many of our members and look forward to meeting everyone. With your continued support we will be equal to the challenges which lie ahead.