Act now to save local journalism

Assembly Bill 5 (Gonzalez), which took effect January 1, 2020, established a three-pronged test before employers can classify workers as independent contractors. The test would have required thousands of newspaper carriers, who work for a few hours in the mornings, to be reclassified as “employees.” Many newspapers will be unable to shoulder these costs and will shut down operations, drastically curtail their features, or will be forced to consider price increases.

In recognition of the impact on newspapers and the vital role that papers play in communities, last year newspapers were granted a one-year exemption to the “independent contractor” test for newspaper carriers. However, the exemption ends on December 31, 2020 — which means the future of newspapers, local journalism, and access to community news is at stake.

Help make the newspaper exemption permanent. Please show your support for local journalism by adding your name here in support of the exemption. 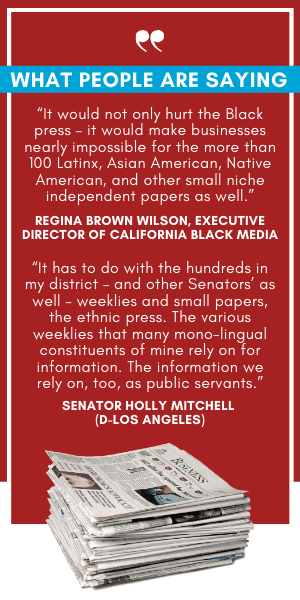 Newspapers play a vital role for residents throughout California communities. The articles and editorials keep communities informed on important local issues, news, and events and helps facilitate awareness and civic engagement. Despite the societal value that newspapers bring to the neighborhood, many have had to shut down due to unsought financial burdens. These devastating impacts to the industry continue to worsen with the passing of AB 5. They include:

TELL US YOUR AB 5 STORIES

In a world without news ...

The Journal of Law, Economics and Organization study identified a multitude of blows to civic health when newspapers close — from declining citizen engagement to increased corruption and declining government performance.

One analysis of cities with steep declines in newsroom staff found less competition in mayoral races. Fewer people bothered to run and the authors found some evidence that people were less inclined to vote.

A Brookings Institution paper found that without a local newspaper, municipal borrowing costs rose by 5 to 11 basis points (about 0.20% to 0.10%), costing the average local government an additional $650,000 per bond issue. Cost for local citizens also increases due to a greater risk of mismanaged projects that are backed by local taxes and fees.

A 2018 study found that levels of toxic emissions spewed by local plants were reduced by 29 percent when they were covered by local newspapers.

Add your name to the growing list of supporters of local newspapers. The form below provides an option to include your assemblymember and senator. If you do not know who your current representatives are, you can search for them using your address.