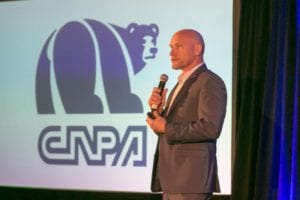 CNPA’s Active Members last week voted to approve two bylaws changes. One will change the chair of the Nominating Committee from the immediate CNPA past-president to the vice president, secretary/treasurer. The vote affirmed that the secretary/treasurer would be in a better position to lead the Nominating Committee process because he or she would be working more closely with the individuals nominated by the committee and likely elected to the board as he or she moves through the chairs and becomes CNPA president.

Also approved by member vote was making the CNPA board’s balance of daily to weekly representation a goal instead of a bylaw requirement. The bylaws previously had required the Nominating Committee to make reasonable efforts to include nominees who are women and members of racial and ethnic minorities and make efforts to include nominees that are representative of all types of members, including newspaper groups, family-owned newspapers and newspapers from a variety of geographical areas and with a variety of circulations. The committee recommended this change after determining that within the membership of CNPA, there are fewer potential board candidates representing daily newspapers than weekly newspapers.

Among other actions, the Board of Directors approved a 5 percent increase in CNPA-member dues.