Most Americans agree. Social media “news” tends to be one-sided and inaccurate. Most also agree that the best antidote to the proliferation of misinformation is local journalism. 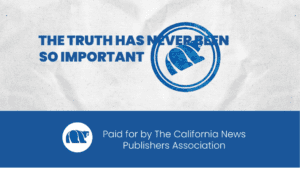 That’s the genesis of CNPA’s new digital ad campaign. “If not us, then who?” pointedly demonstrates the shortcomings of social media and positions the news industry in California as the countervailing force against the effects of fake news.

The industry’s credibility with readers has never been higher. The Pew Research Center reports that two of three consumers now rely on their local newspaper for credible news, and 71 percent do so because they trust the accuracy of local journalism. Proof lies in the surge of newspaper and digital subscriptions since the onset of the COVID-19 pandemic.

“If not us, then who?” seeks to emphasize the point. It goes straight at social media inadequacy and distinguishes local reporting as a critical source of reliable information, ending with the tag line “The truth has never been more important.” The tag builds from a visual showing doctors and nurses fighting vaccine disinformation online.

Voters who see the ads on their various devices are urged to contact their California legislators and ask them to protect local professional journalism. The ads will facilitate the contacts through links to a forthcoming customer landing page at CNPA.com.

At first, these programmatic ads will be delivered to legislators, voters and key influencers in high-priority legislative districts throughout the state. The program will include programmatic placements in CNPA-Member digital publications.