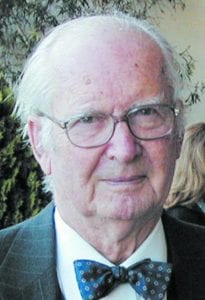 Memorial plans are pending for Newton Wallace, 1964 CNPA president and former publisher of the Winters Express, who died April 1, 2018, at his home in Winters, The Express reports. He was 98.

“Although technically retired, he continued to deliver the walking ‘downtown route,’ delivering newspapers each Wednesday to businesses until November 2016, and still came to the Express office each morning,” the newspaper reported. “He continued to hand-insert the advertising specials through February 2018.”

Newt’s son Charley, who had been publisher since 1983, himself retired in December.

Previously: Winters publisher calls it quits at 96 (The Sacramento Bee)