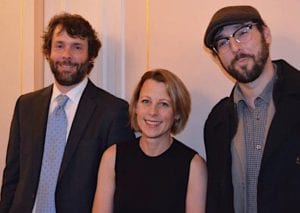 The 2017 winners of the First Amendment Coalition’s Free Speech & Open Government Award were Peter Bibring of the American Civil Liberties Union-Southern California, and Jennifer Lynch and Dave Maass of the Electronic Frontier Foundation.

The First Amendment Coalition is soliciting nominees for the FAC Free Speech & Open Government Award, given each year for performance of exemplary work in the arena of open government.

Qualifications for the award are outstanding accomplishment, service or other contributions to “the people’s right to know” about government. The winner, or winners, could be a journalist, blogger, lawyer, news organization (print or digital), software developer or community activist. We wish to recognize an individual or institution whose actions deserve public honor and emulation for their advancement of government transparency.

Areas vital in the struggle for open government are access to public meetings, public records, the courts, government data; defense of citizens’ right to speak; defense of journalists’ rights; and defense of the right to “blow the whistle” and alert the public to government misconduct and other matters of common concern.

The First Amendment Coalition Award will be accompanied by a $1,000 prize and will be presented at the 141st Annual Winter Meeting of the California Press Foundation, Dec. 6, in San Francisco. The 2017 winners were Peter Bibring of the American Civil Liberties Union-Southern California and Jennifer Lynch and Dave Maass of the Electronic Frontier Foundation.

Please send nominations, supported by links to online documents or written materials such as letters and newspaper clippings to explain the nature of the performance, service or activity to be saluted, its context and its consequences. Self-nominations are encouraged. (Don’t be shy!)

Deadline for nominations, covering work produced in the previous 12 months, is Oct. 31, 2018.