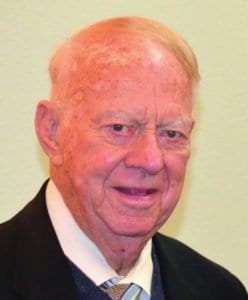 Roy Herburger, 1996 CNPA president and former publisher newspapers in Elk Grove and Galt, died March 4, 2018, at his Elk Grove home, the Elk Grove Citizen reports. he was 87 and had Parkinson’s disease.

Herburger and his first wife Mary acquired the Elk Grove Citizen and Galt Herald in 1959. He also was CEO of Herburger Publications Inc., the Galt printing company for dozens of area newspapers and student
publications.

“His focus was always on the community and schools,” his son David, current publisher and CEO of the company, told the Lodi News-Sentinel. “He rarely, if ever, missed a school board meeting for Elk Grove Unified School District. He went to every event he could possibly go to, always with a camera around his neck. Most importantly, he was always an advocate for helping people. He had quite the legacy of giving to communities, giving to individuals and helping to support them.”

“He always remembered names; he was great in a big room,” Marty Weybret, former publisher of the Lodi News-Sentinel, told that paper. “He always was a happy person, a welcoming person, and I think that was a key to the success of both the Elk Grove Citizen and the Galt Herald.”

A memorial service is being planned.