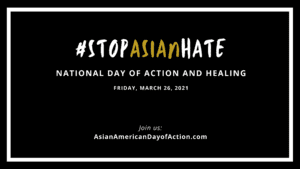 Day of Action. Day of Healing.

Be sure to Use the official hashtag: #StopAsianHate

The following toolkit is to serve as a reference for individuals, organizations and allied groups to #StopAsianHate. This initiative was first started by Congresswoman Grace Meng and California Assemblymember Evan Low. The continued violence and racism against Asian Americans have reached their highest levels in our lifetime and must STOP. Out of crisis comes opportunity to rally together, stand in solidarity, and demand action.

To Participate in our Day of Action:

Why March 26?
On March 26, 1790, the Naturalization Act was signed into law, prohibiting non-white people from becoming citizens of the United States. Over 200 years later, Asians in the U.S. are still suffering from the effects of the racism our country was founded upon. Asian elders are being physically assaulted in the streets. Asian American children are afraid to go back to school. We are still grieving the murders of 6 Asian women in a racially-motivated killing spree in Atlanta last week.

That’s why, on March 26, we’re inviting you to join us for a social media campaign to #StopAsianHate. Ending this horrific spike in anti-Asian violence starts with people like you speaking up about this growing problem. Start by posting your message of support for Asian American communities using the hashtag #StopAsianHate on Friday, March 26.  If we all join together and raise our voices against anti-Asian racism, we can keep our communities safe.

LINK TO FOLDER WITH GRAPHICS

LINK TO FOLDER FOR OTHER GRAPHICS & VERSIONS

Messaging Guidelines for Coalition to #StopAsianHate

Listen to local groups and the most impacted communities first. Continue to amplify the harms that Asian Americans are facing, but don’t override or silence their voices by pushing an agenda that doesn’t align with what the community needs. Let’s build a chorus of solidarity and ensure the Asian American community receives the support it needs to fight anti-Asian racism.

Actions you can take:

Need a more detailed list?  Refer to this Action Page to #StopAsianHate

As the entire country grapples with the COVID-19 pandemic, the Asian American community is also facing an alarming rise in anti-Asian violence, racism, and discrimination.

Asian Americans are the target of violent assault, traumatic verbal harassment, and often-overlooked discrimination that aims to devalue their dignity and their place in society. Such racism is the result of white supremacy and creates an unacceptable environment of fear and terror.

These events did not occur in a vacuum. America has a long history of vilifying minorities, including targeting the Asian American community, and using federal law to enable this discrimination and violence.

The current rise in anti-Asian racism is not just limited to random acts of violence and discrimination. It reflects current geopolitical tensions and the use of anti-Asian rhetoric by major political leaders—rhetoric that is putting a target on the backs of Asian Americans.

This violence and discrimination exacerbates the loss and trauma caused by the COVID-19 pandemic—even as the community plays a significant role on the frontlines of fighting the disease.

Asian Americans continue to grapple with longstanding stereotypes as “perpetual foreigners” and the “model minority.” Both stereotypes result in the disenfranchisement and demonization of vulnerable populations across diverse communities.