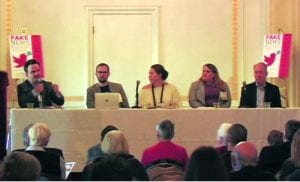 The discussion focused on the “fake news” phenomenon that burst onto the scene during the 2016 election and appears to have earned a permanent spot in the journalistic and political lexicon. Some of the questions pondered included: What is fake news? Do tech companies bear responsibility for containing it? And, what is the role of the traditional press?